One of the things I’ve been very consistent with is pre-prepping my food after I kill it and bring it home 😉  This is something I tried to do when I was attempting to lose with Weight Watchers, but it never became a habit.  Now, my refrigerator constantly looks like it’s full of leftovers because I slice, dice, and chop before I put something up.  At first I was worried about “what if I need this carrot for a recipe?” then realized – with very few exceptions – it really doesn’t matter how it’s cut up, as long as it’s in there. There is always bowls of carrots, peppers, and broccoli, and usually mushrooms (but I forgot to grab them this week, which makes me sad). I do the same thing with melons.

Another thing I’ve learned is that organic grown tastes better.  I used to shy away from raw carrots because I couldn’t stand the dry taste of the “baby” carrots, or how wet they’d get in the package after opened.  I’ve learned why they’re like that, but that’s a post for another day.

Organic carrots are sweeter.  Like kale, I now throw carrots in just about everything I cook these days.  I buy 2 pounds, and immediately cut half of them into coins and toss them in a bowl when I get home.  I grab a handful for lunch, or toss them in our salads.  I also eat almost a whole one while I’m cutting them up.  I don’t cut them all up since I keep some back for roasting, but I usually have to slice some more to refill our bowl.

The great thing about this is the ease to grab a handful and chow down. We eat a lot of non-lettuce salads around here now.

My mom used to make Chicken Cacciatore when I was growing up. (Cacciatore means “hunter” in Italian. )  This reminds me of her recipe, but it’s not the same.  It has a super quick prep time, since my veggies are already prepped, but it is something that you need to plan as it takes about an hour to simmer.  It’s made with my favorite jarred sauce:

Pour olive oil in a non-stick pan. Heat on medium high and fry thighs until brown on each side. Use a large enough pan that the thighs do not touch. Pour a thin layer of sauce into a pan and place thighs skin side down on top. In a bowl, mix remainder of sauce and all the veggies, and pour on top of chicken. Cover, and cook on medium to a boil, then low for 30 minutes. Turn chicken over, cover back with sauce, and cook an additional 30 minutes.

It will be thick at first, but will thin out during cooking. The veggies never get mushy during cooking.  And I’m pretty much guestimating the amount of veggies since I just grab a handful and toss them in.

Posted on August 19, 2014 by Terri | Comments Off on Stuffed Peppers

The unhappiness that the Rainbow Hash recipe brought has stayed on my mind and last night I couldn’t take it anymore so I changed it up and fell in love with it.

Set oven for 350°. Grab a bowl large enough to hold all of your chopped veggies. Get your food processor out. Pre-chop the cauliflower florets, toss them in, and process the heck out of them until it looks like rice. Pour it into the bowl, then get to chopping your carrots and cabbage, separately, and pour them in your bowl. Add coconut oil to pan, heat it up, and cook your sausage. Add salt, black pepper, and red pepper. Once meat is cooked add in your chopped veggies, stir it up good, cover and cook for 10 minutes on medium low, stirring twice during cooking time.

Slice your green onions, and chop your kale, and set aside. Cut a circle around the top of the stem of your peppers, and pull the core out. Use a spoon to scrape the veins down as thin as you can without breaking through the peppers.

At the end of the 10 minutes, stir in the green onion and kale and taste to see if you need more salt.  Add in the tomato paste and water, stir, and simmer for 5 minutes..   Stuff your peppers as full as you can.  Place them in a casserole and cover.  Bake 25-30 minutes.

NOTE: If you’re using green bell peppers, or you like your peppers soft, you may want to boil them about 5 minutes, once they’re cleaned out. Do this at the beginning and turn them over to drain while prepping the rest of the ingredients. Also, on the red pepper, we like spicy so you may want to start with 1/4 tsp and taste. You can always add more right before you stuff your peppers.  Our spicy was just enough to make you think “man that’s real spicy and I need some more.”  Or, just barely make your nose run 😉

I served them with roasted green beans, and could only eat half of my pepper. 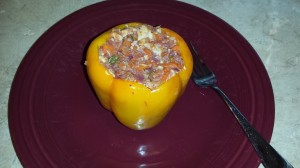 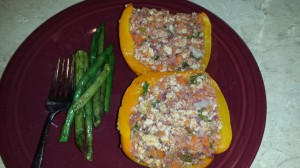 Mister calls these Rainbow Bright Peppers because of how bright all the veggies are.

Comments Off on Stuffed Peppers

I’ve been working real hard on menu planning.  I have 2 pantries.  One by the kitchen I keep things that we use a lot, and snacks.  The snack part of the pantry is looking rather bare 😀  I think the only thing in that part is my 2 lonely packages of cashews and almonds.

The other pantry is where I store our extras and paper goods and it’s still full.  Since I’m slowly transitioning, I’ve decided to pull one meal a week from there until it’s all gone.

I don’t know that it’ll ever be perfect, but I think doing this is another thing that’s keeping me on task, and I don’t feel like I’m wasting money by throwing things away.  I do know there are some things in there that I need to donate.

Only once this past week did I ever feel hungry, and it was because I didn’t plan properly for that day.  We had a lot of outside things going on, and I ended up hitting the drive-thru at Sonic.  In the past I would have gone xlarge, but I ordered medium, felt guilty about it, but shoved those tots down my pie hole anyway. I’ll be honest and say I really, really enjoyed them.

The other meal I had out this week was planned, and I didn’t enjoy it.  Our Taco Bell supports the DBacks and every time they score 6 runs TB offers 3 free tacos with the purchase of a large drink.  We used to take advantage of it every single time, but, in addition to the DBacks having a rough season and not scoring 6 that often, the few times they have we have had other plans.  This past week we did the deal, adding a quesadilla to the order.  I ended up eating only 2 of my tacos and only 2 small pieces of the quesa.

So, all that blather leads to this.  I try to only buy what I know we’ll use up between store visits.  I’m determined not to toss anything because, let’s face it, organic is expensive!

I had some carrots that I bought for another recipe that didn’t happen because I forgot to buy one of the ingredients.  Instead of taking the chance of them not going bad I roasted them, and served them will grilled steaks and a salad. 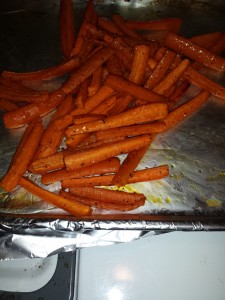 Set oven to 400° and line a baking sheet with foil, dull side up.

Toss it all in a bowl until carrots are covered.
Spread them all out in your pan being sure none are stacked on top of the other.
Bake 30 minutes, turning pan after 15 minutes.
Let cool a few minutes then serve.