One of the things I’ve been very consistent with is pre-prepping my food after I kill it and bring it home 😉  This is something I tried to do when I was attempting to lose with Weight Watchers, but it never became a habit.  Now, my refrigerator constantly looks like it’s full of leftovers because I slice, dice, and chop before I put something up.  At first I was worried about “what if I need this carrot for a recipe?” then realized – with very few exceptions – it really doesn’t matter how it’s cut up, as long as it’s in there. There is always bowls of carrots, peppers, and broccoli, and usually mushrooms (but I forgot to grab them this week, which makes me sad). I do the same thing with melons.

Another thing I’ve learned is that organic grown tastes better.  I used to shy away from raw carrots because I couldn’t stand the dry taste of the “baby” carrots, or how wet they’d get in the package after opened.  I’ve learned why they’re like that, but that’s a post for another day.

Organic carrots are sweeter.  Like kale, I now throw carrots in just about everything I cook these days.  I buy 2 pounds, and immediately cut half of them into coins and toss them in a bowl when I get home.  I grab a handful for lunch, or toss them in our salads.  I also eat almost a whole one while I’m cutting them up.  I don’t cut them all up since I keep some back for roasting, but I usually have to slice some more to refill our bowl.

The great thing about this is the ease to grab a handful and chow down. We eat a lot of non-lettuce salads around here now.

My mom used to make Chicken Cacciatore when I was growing up. (Cacciatore means “hunter” in Italian. )  This reminds me of her recipe, but it’s not the same.  It has a super quick prep time, since my veggies are already prepped, but it is something that you need to plan as it takes about an hour to simmer.  It’s made with my favorite jarred sauce: 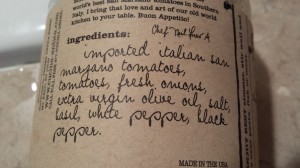 Pour olive oil in a non-stick pan. Heat on medium high and fry thighs until brown on each side. Use a large enough pan that the thighs do not touch. Pour a thin layer of sauce into a pan and place thighs skin side down on top. In a bowl, mix remainder of sauce and all the veggies, and pour on top of chicken. Cover, and cook on medium to a boil, then low for 30 minutes. Turn chicken over, cover back with sauce, and cook an additional 30 minutes.

It will be thick at first, but will thin out during cooking. The veggies never get mushy during cooking.  And I’m pretty much guestimating the amount of veggies since I just grab a handful and toss them in.

This entry was posted in Recipe and tagged Paleo recipe. Bookmark the permalink.