How busy have you been?  Are you planning out your 2015 year?

I’ve been busy, but not crazy busy, except in spurts.

This past weekend was the Phoenix COMICON Fan Fest.  It has been touted as a success and that makes me happy.  Two and a half weeks from now I have my first meeting for COMICON 2015, so I’m trying to not even think about anything related to it until then, but it’s a near impossible task I’ve set myself.

Next week we’ll be in California with Son and Girlfriend.  I am really excited about that.  Since we moved here we have flown Son and Girlfriend in to spend Christmas with us.  That, and a pair of tickets to Disneyland, has been their Christmas gift from us.  Last year we asked them if they would mind if we came to California and all 4 of us went to Disneyland on Christmas.  You would have thought they were both 10 with their reaction 😀  We’ll be crossing an item from my bucket list by staying at the Disneyland Hotel while we’re there.  We’ve decided to go to Disneyland on Christmas Eve and California Adventure on Christmas Day, since we’ll have to leave Anaheim late Christmas Day to drive to Oceanside.  We haven’t completely decided when we’ll return to Arizona, but no later than Sunday.

I am working on a Christmas item right now.  I gave up on getting my room painted until after Christmas.  Between Mister’s studying for finals, my COMICON obligations, and some sewing I needed to get done, I quit stressing about it, cleared a spot and set my machine back up.  Here’s where I shoved everything that was stacked on my table, so I could sew.  That white “wall” is my design wall and behind that’s my shelved in closet. 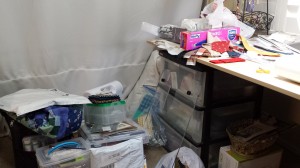 And here’s what the guest bed looks like (there are 2 tall piles on the floor I didn’t bother taking photos of). Most of that will go on the shelves behind the design wall in the photo above. 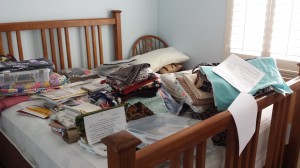 Here’s what I finished by yesterday.

Hoping to finish the piecing today and the quilting and binding tomorrow.

Very little stitching on my Lizzie*Kate mystery and no updated photo of it.

That second question up there?  I have been planning out  my 2015.  I try to adopt a positive thought for myself every year.  Last year it was “happy thoughts” and no matter what was going on I tried to always remind myself to think happy thoughts.  I had a really good year with that.

This year I tried to continue that and added on to be less judgmental by reminding myself that I may find myself in that person’s situation one day, or that I didn’t know the story behind what was making someone behave the way they were, either toward me or toward others.

This coming year my plans are to “quit saying, start doing.”  I’ve been listing my WIPs and projects I want to start and trying to formulate a plan that will get me doing more.  I love my calendar on my phone for reminding me of appointments and not letting me double book something, but I’m going back to using a paper organizer for my projects.  More about that in a second.  I’m also going to use Wunderlist.  I have it downloaded on my computer, phone, and tablet.  It’s the first thing that pops up on my computer when I start it up and it shows me what I have to work on, as a reminder to not get sidetracked. I’m tracking my WIPs and projects I want to do on it since I can add things from the different electronics and it’ll sync between the 3.

After following a discussion Melissa was having on Facebook, and others sharing what I’ve been thinking and the types of planners they use, I’ve decided on a Planner Pad.  I love that it has the possibility to be used as something other than an appointment book (which my phone covers).  Also, I will be using my timer more to keep from letting the computer suck me in.  I have found myself spending less time on it the last few months anyway and it has made a difference in what I’ve accomplished.

I have 4 trips planned for 2015.  Vegas (Jan), Prescott (Apr), Tennessee (Jun), Prescott (Oct).  I am stepping up my volunteer activities as well.  In addition to continuing my sewing for AZ Blankets 4 Kids, I’ve taken a larger responsibility with COMICON, and I am the new Membership Director for the Arizona Quilters Guild.  I am looking forward to having a very heart-fulfilling year.

So my goals for 2015 aren’t to get this done, or that finished, etc., but to just be more organized which should lead to productivity.  I guess I’m sort of going to run my retired life like I ran my working life 😉

I swear, for someone who’s “retired” my calendar sure is full these days.  I’m not complaining, but feeling very lucky and in some cases very appreciated 😉  There are stitch-togethers one night a week at my LNS; twice a month sew-togethers with a local group; guild meetings twice a month; a sew-in at my LQS; manicure and pedicure appointments, dental appointment, COMICON meetings – the event is next weekend!; and Christmas and our trip to California is just around the corner. Plus there are 2 other sew-togethers each month that I haven’t been able to attend yet, because of my busy schedule. Oh, and let’s not forget the mystery quilt!

While all of this is bringing me joy (okay, except for that dental appointment – which actually contained good news on the surgery front) it is sapping my mental capacity and I’m forgetting to blog again.  I haven’t felt like there has been that much to share.

So, I’m pulling out my phone to see what pictures I’ve taken this past week.

Our oranges are starting to turn.  Yum! Winter harvest. 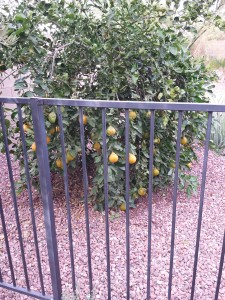 I bought a new cooking tool. I’ve wanted one for quite a while and it ended up on sale at my local grocery store, on 10% Senior Discount Day!  Yay!  Haven’t used it yet, but I see a pot of stew brewing in my future. 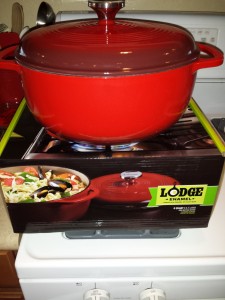 I finished another stitching project 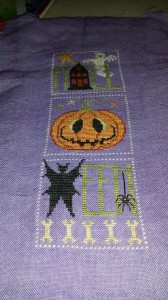 which meant I got to start a new one 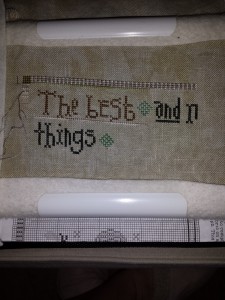 As to the mystery quilt, I managed to get 28/100 of the first part made.  I’m cool with that.  Last year I got behind and gave up.  This year I’m following Bonnie’s instruction to stop where I am and start on the next part when it come out.  After I hit “publish” I’ll be working on part 2.

Before I forget, again, I know I haven’t shown any weight stuff on here lately.  With the busy-ness I have had I have been hopping on the scale Tuesday morning, writing it down, and hitting the road running, so to speak.  I actually haven’t been running.  Or even walking.  I’m just now back to my knee not hurting after my graceful tumble down the mountain a month ago.  I’ve been throwing a month-long pity party and eating sugar.  I’ve paid for it the next day waking up with a headache, and my weight has bounced up and down.  I’ve reminded myself that this is a lifelong way, forgiven myself, and this past week, it was back down to what it was the week I fell. I’ve got my alarm set to get out and start walking again tomorrow.

Unless I get a chance to share my Part 2 Grand Illusion progress, I probably won’t blog again until after next Sunday.