Oh my goodness, my Christmas was wonderful!

But it couldn’t have happened without the greatest babysitter in the world!  This is the first vacation we’ve taken together in 5 years.  My BFF’s daughter K house/puppy sat for us and it was so great to not once worry about anything while we were gone.

This poor fella was wearing himself out welcoming everyone as they checked in to the hotel. 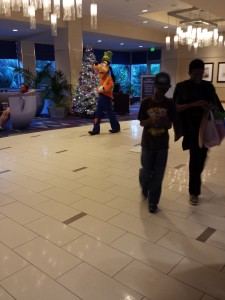 I fell in love with the headboards.  You can’t see it very well in this photo but there are tiny little nail pricks that created firework bursts in the sky. 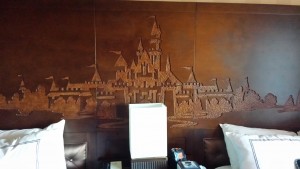 We walked around Downtown Disney after we got settled. I found this shirt, that is SO me, but decided against getting it.

I also spotted this one and snapped a photo since I’m hoping I can get Mister to paint it for me.

What looks like white, is really silver and I think this would be great painted in pixels like he did the storm trooper for his art class.

We had a nice dinner and a couple of drinks, then headed back to our room to sleep until the kids arrived.  Future DIL decided to take the train down to Oceanside and ride back up to Anaheim with Son after he got off work at 9:30.  We were expecting them about 11 p.m. but there was a construction site that took more than an hour for them to get through and by the time they arrived it was 1:30 a.m.  They wanted to do gifts as soon as they got there.  They even got me “Disney” gifts in addition to 2 GC to Ulta.  The fragrance is from FDIL’s mother. 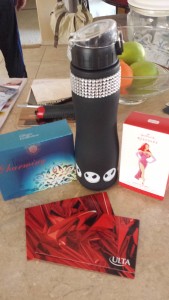 I have no idea what time it really was by the time we got back to sleep.  Mister got up at 6 to go buy our tickets so we could get in the park an hour earlier than the general public.  Good thing we did too, since we were on our 3rd ride by the time the park opened.  We kept waiting for the huge crowds to show up and slow line times down, but we never had a long wait, or at least longer than 30 minutes.  We took full advantage of the Fast Passes and leapfrogged our way through the park.  The ONLY ride we didn’t ride, that I wanted to ride, was the run away mine train.

At some time during the afternoon the kids headed back to the room for a nap and Mister and I went to some areas and shops to pass the time.  We had Fast Passes for the evening light show and met back right about 8 p.m.  After the fireworks show we started working our way back to the hotel and the best ride of the day….our beds.  😀

The next morning I met a friend in Downtown Disney for breakfast while Mister and the kids started packing up the room and loading cars.  We made some changes to our plans so the kids were headed to FDIL’s parents to spend Christmas Day and we were going back to the park.  It was so much fun accepting and wishing Merry Christmas to everyone we walked by.   Our hotel had a beautiful photo spot and we took advantage of it.  People just lined up and whomever was in line next took the person in front’s photos for them.

It wouldn’t be a trip to Anaheim/Disneyland for me if I didn’t end my trip with a visit to the Jazz Kitchen Express for breakfast.  Since I had already eaten, I headed to Starbucks for coffee while Mister and the kids had breakfast.  They did save me a beignet.

After the kids left we headed to the monorail for a ride into the back of the park.  We were planning on riding this again but when we got off the train we walked into this! 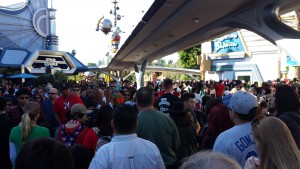 It was about 11 a.m. and the Fast Passes told us to come back at 8 p.m.  No. Way.  LOL  We ended up doing a whole lot of walking and did get to ride the runaway mine train.

We headed back to the Jazz Kitchen for lunch (shrimp po boys and ya-ya gumbo!).  Santa did his shopping on the way out of the park Christmas day.  I ended up with 2 scarves (look close for the Disney references), brush cleaner and Urban Decay Naked 2 eye pallette, a Castle charm for my bracelet (not pictured), and a Dooney & Burke Disney Shopper. 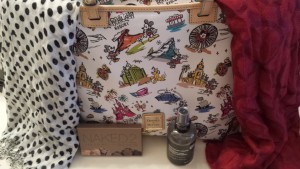 Every year when we’d go to Disneyland on Thanksgiving, I’d add a Jim Shore Disney Christmas piece to my collection.  I did buy a Mickey this trip, but we also purchased a new piece.  Mister fell in love with the bright colors of the Britto collection so we will be building that as well.  He decided on this piece since it made him think of the dogs.

We drove down and spent the night in Oceanside.  We got settled in our room about 7 p.m. and sent straight to bed.  Talk about feeling old and worn out!

Son drove down from FDIL’s house early that morning and we had breakfast before saying goodbye.  On our way out of town we headed to Buccaneer Beach to watch the sun rise over the ocean and surfers and see if Mister’s surfing buddies were hanging out.  We actually passed one of them driving off and he turned around and told us that the other one had left earlier so we were able to call him and he turned around as well.  I was glad he got to meet up with them for a nice long talk. 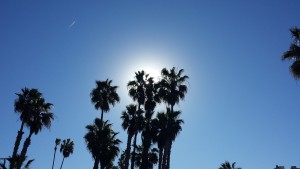 While I love living here in Arizona, and I think the desert is such a beautiful place, I miss the Pacific ocean so much that I cry every time I see it again.  There’s just something about the sound of the waves that calms my heart and I especially love walking on the beach when stormy weather is approaching.  It’s so wild and wonderful.  I did live on the Atlantic ocean for almost 2 years and it wasn’t the same.

I was so happy to get home and see the puppies.

The postman left some wonderful packages for me.  I took advantage of some great sales before we left.

The Downton fabrics are all low volume, and the Shop Local has stitching related prints inside.  These will be used in some scrappy quilts, especially in Wild & Goosey.

Threads of Time will go into my Farmer’s Wife scrap bins.  I couldn’t resist the Petite Prints and all that red.  They’ll be used in my upcoming Bonnie Hunter Happy Scrappy Houses class in a couple of weeks.

This layer cake and charm pack will also be used in Happy Scrappy Houses. 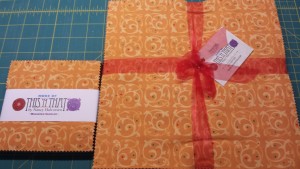 And these are the FQs from my December color of the month club I joined in place of one of my finished BOMs.  I’m thinking of using the 2nd from the right as the chimney’s in my Happy Scrappy Houses.

So today I’m being as lazy as I can and still get in a trip to the grocery store and do some laundry.  College football and cross stitch sound mighty fine.

Tomorrow, I’ll think about working on my wishes for 2015 😉

This entry was posted in Family, Stash, Travel. Bookmark the permalink.

2 responses to “Oh my goodness, my Christmas was wonderful!”