The last couple of days have brought in the prizes from the contests I mentioned here and here.

I’ll share the fabric from Andover first, because I’m going to be an ungrateful contest winner and whine a little about the other prize 😉

From Andover I received 10 (2 of each line) of their version of charm packs.  They don’t sell charms packs to the public, just give them to designers, and contestants (at least that’s what I’ve been told by a couple of fabric designers).  The charm packs were, from left to right, Renee Nanneman of Need’l Love Black Magic and Linen Closet, Jamie Kalvestran Chickadee, and Jo Morton Blue Variety and Madison Manor.

and 14 FQs from the new Jo Morton Savannah line.

I was doing the new-fabric-boogy in my kitchen after I opened the box and saw the great fabric and let out a “whoop” when I saw Savannah!

Doesn’t it look nice on my Jo Morton shelf! 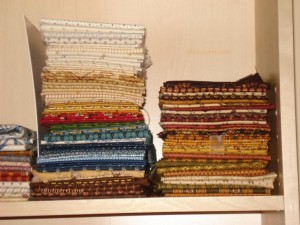 Before I share the other contest let me say that I NEVER enter a contest just because it’s there.  I only enter contests (or use grocery store coupons 😉 ) for items I know I would use/buy anyway.

In the Quiltmaker Contest I was expecting to receive only one of the books shown in the contest since we were asked to comment on what our favorite of the group was (I chose Diamond Traditions).  Here’s what the site says about the giveaway (they lined out after winners were chosen):

How about a giveaway? I’d love to send these to Quilty Pleasures readers.

I would have been happy with any of them.

Here’s where I start to sound like an ungrateful winner.  Not a single one of the books mentioned in the post were received by me.  All 3 of the books I received have 2012 copyright dates.  Only 1 of the books would I have even contemplated buying. 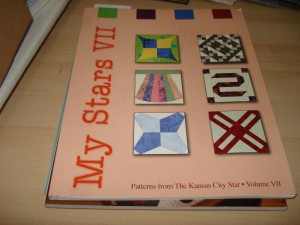 I wrote an email to the person who contacted me about being a winner and thanked her for the books, and told her I wanted to make sure that I had not been mixed up in another contest because I had received 3 books instead of just 1, and that none of the books I had received were mentioned in the contest.  This was on Wednesday.  I’ll give her until Wednesday to reply, then will decide what to do with the unwanteds.

This entry was posted in Quilting, Stash. Bookmark the permalink.